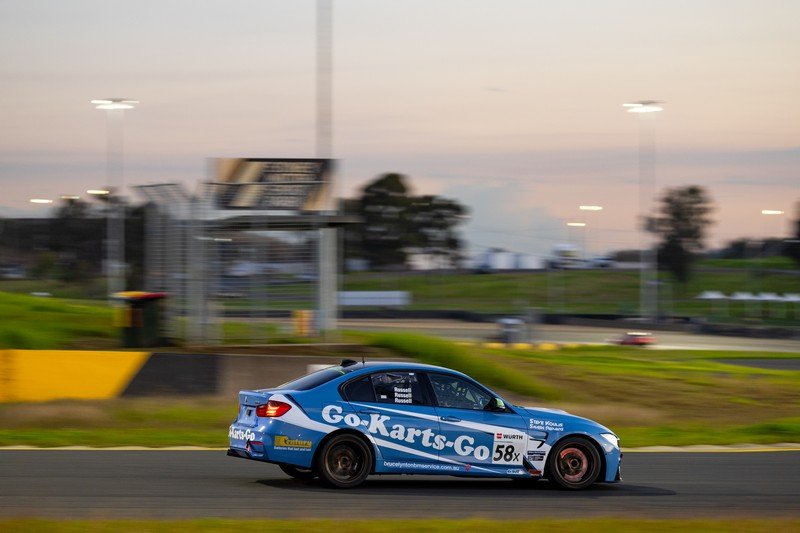 Posted at 19:35h in Motor, racing by news@ausprodcars.com.au

The first races of the 2022 Australian Production Car season have been run and won with great success at Sydney Motorsport Park today, setting the stage for a 300km bonanza Sunday morning.

Enjoying particular success in today’s two 30-minute races was Aaren Russell, who took the outright and Class X victories in both races in the #58 Go-Karts-Go BMW M3 he will be sharing with Drew Russell and Wayne Russell for tomorrow’s enduro.

In race one, Russell took the lead early in the race from P2 on the starting grid, enjoying a clean run to cross the line ahead of the #23 Bruce Lynton Service BMW M3 of Tim Leahey and the #444 Property Investment Store BMW M3 of Anthony Soole.

Fourth outright and first for class A2 was Ben Gersekowsi in the #38 KCK Lubricants/Vic’s Timber BMW M3, crossing the line ahead of Rob Rubis (#56 Prestige Connex BMW M4). First for Class A1 was Jimmy Vernon, crossing the line in sixth outright in the #50 Hunter Pacific Ceiling Fans Mitsubishi Evo X.

Sam Silvestro (#55 S-Sport Racing Mazda RX8 – 12th outright) and Matt Thewlis (#51 MWM Racing Mini – 15th outright) took out the class C and D victories respectively, despite Thewlis being forced to drive tentatively for the second half of the race after hearing something breaking and rattling around in his Mini. No Class E winner was recorded, with Allan Jarvis crossing the line but was not classified as a finisher due to not having completed the minimum race distance after battling tyre issues.

In race two, Beric Lynton in the #23 lead the opening 10 laps, before falling foul of a gear selector issue which allowed a waiting Aaren Russell to pounce for the lead in the final third of the race, going on to lead a hard-charging Shane Smollen (#56 Prestige Connex BMW M4) across the line ahead of Lynton.

The #444 was fourth outright ahead of the A1 winning #9 Parramatta Vehicle Services Evo X of Tyler Mecklem. Vernon was next across the line in sixth outright after a blistering race start, with the #64 Cachet Homes Clubsport driven by Mathew Holt taking out the A2 class win in P7 outright.

Once again, it was the #55 and #51 which claimed the class C and D victories respectively, but this time with Ben Silvestro (13th outright) and James Keene (11th outright) at the wheel, while Jarvis took out the Class E win from 15th place.

Ben Gersekowski’s #38 was forced to retire early following contact with the #118 DA Campbell Transport Mitsubishi Evo X of Cameron Crick which left him with a buckled wheel, however the team is confident they will be ready to resume running in time for tomorrow’s big 300km race.

It was a challenging day for the #118, with the race two contact preceded by a off-track excursion in the opening race with Dean Campbell at the wheel; while the #15 Whalstrom Financial Service BMW 130i of Chris Holdt and Chris Gunther (ABS issues), and also for the #33 York Miedecke Ford Mustang of George Miedecke and Leigh Burges (electrical issues) also endured character-building outings in both races.

Rain mid-way through the second race threatened to throw a spanner in the works, but was raced through relatively issue free – although highlighting the wet weather performance of the Evos and the Golf in particular and the differences in the tyres selected by competitors from the new-for-2022 tyre panel (consisting of Hankook, Yokohama, MRF and Dunlop).

The round one action for the 2022 APC will continue at Sydney Motorsport Park tomorrow (Sunday 29 May) with a 300km race at 7.20am.