LILLIS LOOKING TO MAKE UP FOR LOST TIME IN 2022 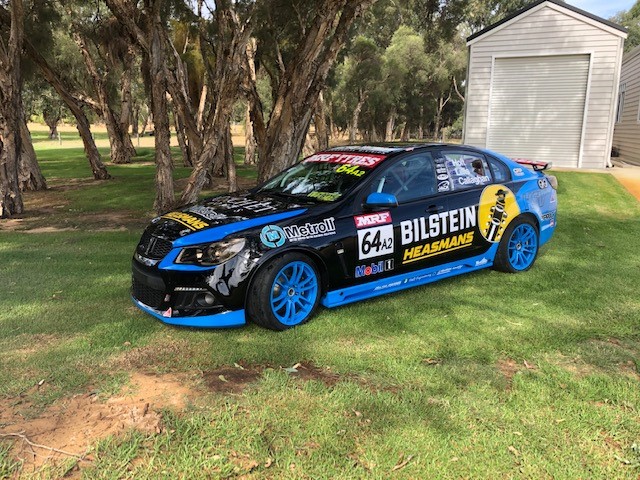 Posted at 16:54h in Motor, racing by news@ausprodcars.com.au

After two years of being unable to compete outside of Western Australia due to border closures, Chris Lillis is keen to get into action for the 2022 Australian Production Cars in his HSV VF Clubsport, starting with May’s season opener in Sydney (May 27-29).

Lillis and Nathan Callaghan drove the Clubsport, nicknamed ‘Kate’, to second outright in the 2019 title but since then the car has been largely sitting idle save for some local events earlier this year.

In 2022, Lillis will share the drive of ‘Kate’ with Matt Holt for the opening two events and Nathan Callaghan later in the season, with the format change and introduction of the tyre panel proving enticing for the three-time A2 class champion.

“I have competed in the Perth city and Bunbury City Targa earlier this year with one of my daughters as co-driver in our production car, and have also done one saloon car round, but that has been it for a couple of years.

“Aside from a bit of a birthday mechanically after we took the car to second outright in the APC in 2019, some new stickers and new sponsors, Kate is basically the same car.

“Matthew Holt will be partnering with me for driving duties at the Sydney and Phillip Island rounds, as Nathan is expecting a new addition to the family around that time and he also owns and runs his own business Calmack Panel and Paint which is also extremely busy at the moment.

“Nathan will join me for the last two rounds at this stage, and we are 50/50 at the moment on whether we will be able to make it to Queensland due to how that falls timing wise. That could change though depending on how we are looking in the championship after Phillip Island!

“We came so close in 2019, although coming second outright was a really good result we definitely wanted to take it out with our home-grown Aussie muscle car that has still has three pedals.

“We have been lucky enough to win our class title three years running so that will be our first aim this season, and we will see where that leads us!

“To be honest, we are really just looking forward to getting back into racing and being able to travel around our amazing country again and have some fun!”

Lillis is also looking forward to seeing the enduro format and the new tyre panel in action this season.

“The formats are great and is what I believe Production Car Racing is all about. If we wanted to do sprint format racing, we would go and do TA2s or 86s, so we are happy the calendar has gone back to more of what it was like in 2019 and prior,” he said.

“With this format we believe and have proven that you can still compete for outright victory in a lower-class car such as our A2 car. I also think that the move to a choice of tyre is also a good one.

“We are hopeful of seeing some great fields this year too – with the bumper Bathurst 6 Hour entry list it shows how many production cars are out there, so I hope to see many of them at the APC rounds this season. I know for us, we have definitely found running the APC has always helped our Six Hour campaigns as our crew are used to the fuel and tyre stops and what it takes to run these cars for several hours at a time, so I recommend it!”

While ‘Kate’ is a proven performer, Lillis also has plans for an exciting new weapon to be debuted possibly as early as the APC season finale at the Bathurst International.

“We are currently building a Camaro and hope to have it ready by the end of the year, maybe for the APC finale at Bathurst, and definitely for the Six Hour next year if we don’t make that,” he explained.

“The plan is to run the whole APC in 2023 in it. There have been some challenges with the build as no one else has done one in Australia before, but it is really starting to take shape now,” Lillis concluded, while thanking Bilstein, Metroll, Cachet Homes, Calmack Panel and Paint, Stewart and the boys at Metcalfe Automotive; and Matt Holt from Holt engineering for their support.

The series will provide a mix of endurance formats from 30-minute races to one-hour races to 300km events across the five rounds; with competitors able to compete on their choice of tyre from a nominated tyre panel featuring Hankook, Dunlop, MRF Tyres and Yokohama.